A Return of EC Inhalation? Chromatography Identifies Drug Use

Ethyl chloride - also known as chloroethane - is a flammable gas that has many different uses as a volatile solvent. Volatile compounds readily evaporate when exposed to the air, whilst solvents are liquids that can carry other compounds in solution. Ethyl chloride has been used as a refrigerant, chemical intermediate and used as a general anaesthetic before better anaesthetics were developed.

Ethyl chloride is widely used as a volatile solvent in many legal products. It is commonly used in sports sprays to soothe injuries. Tattooists and piercing parlours also use the spray to cool down the skin prior working on the skin, as this can help to reduce the pain. In many areas of the world it is readily available, and it is believed that this could be behind an increase in its use as a drug used to get high.

There have been several news reports from around the world that once again, ethyl chloride is being used as a recreational drug to get high. Volatile substances have been misused for decades to get high. But because of the perception that they carry low social and health risks, there has not been too much research relative to other drugs.

Highly volatile substances are inhaled through the nose or mouth, and they can rapidly reach the bloodstream and nervous system due to their volatile and fat-soluble nature. There are many different types of inhalants including:

All of these have the capacity to cause harm and even death. Different inhalants are used for different purposes, not just for the effect they have on the mind, but also for the effect on the body - for example amyl nitrate is used as a muscle relaxant. Toxicological analysis of inhalants can be done using several methods - but one of the key techniques is gas chromatography. The use of gas chromatography to analyse volatile samples is discussed in the article, Gas Chromatography - Vacuum Ultraviolet Spectroscopy: A Versatile Tool for Analysis of Gasoline and Jet Fuels. With the increase in media report on abuse of ethyl chloride, perhaps it is time for research hers to take a closer look at this volatile subject. 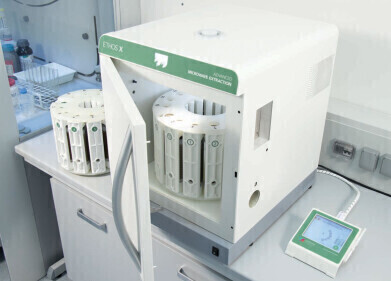