What do you look for in a coffee? Some people are all about strength for an intense pick me up. Others are drawn to the frothiest cups they can find. However, for many coffee drinkers, the most important factor is the mouthfeel – a sensation that makes the coffee feel somehow ‘full bodied’.

The problem is that it’s so hard to describe, let alone create that sensation. That was exactly what scientists at Ohio State’s Food Innovation Centre looked to investigate.

What is full bodied?

The first challenge for researchers was to agree on what sensation they were looking to identify. After all, one person’s ‘full bodied’ could be another’s ‘weak and washy’. To do so, they used a descriptive analysis panel of eight experienced coffee tasters, who agreed on a set of references to illustrate sensations that differentiated cups of coffee.

They then used four different coffees which had been given various body ratings by the Specialty Coffee Association – an authority on coffee for sure. After tasting, the four tactile sub-attributes that made up the distinctive mouthfeel were identified as chalkiness, mouthcoating, astringency and thickness.

Coffee tasting, but not as we know it

Next, the coffee ranked as having the fullest body was tasted by their panel to rank its mouthfeel for each of those four sub-attributes. But it wasn’t a case of sipping a hot cup of Joe. Instead, the team separated the coffee into 12 fractions using liquid chromatography – a method discussed in the article ‘Faster Time to Results for Ultra-Performance Liquid Chromatographic Separations of Metal-Sensitive Analytes’.

Each fraction was screened by a panel of five tasters and ranked for each sub-attribute. If a fraction was ranked highly for mouthcoating, for instance, it could be further purified to find the exact compound responsible for a mouthcoating sensation.

A cluster of mouthfeel molecules

After purifying and screening various fractions, researchers found a cluster of small molecules which contribute to the overall mouthfeel of a coffee. That includes melanoidin compounds, formed by the Maillard reaction when coffee is roasted, which were linked to a coffee’s astringency. They also isolated a novel compound containing an amino acid, which was related to a coffee’s chalkiness.

The next step is to identify which coffees contain these compounds and how they’re grown and roasted. This will help coffee growers and producers to fine-tune their processes to curate the perfect cup of coffee, tailored to consumers’ preferences. 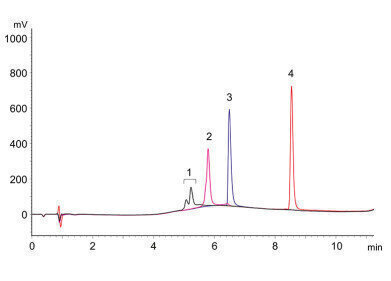