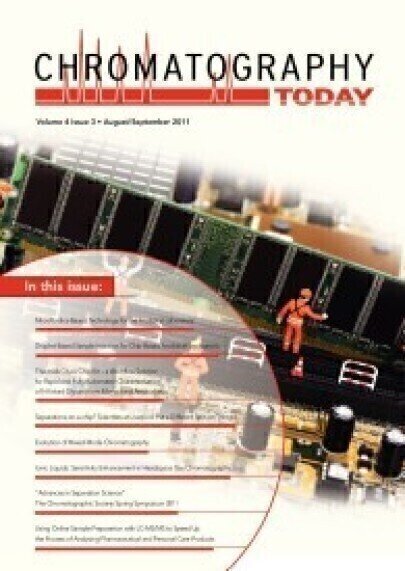 Welcome to the fifteenth edition of Chromatography Today, an edition which highlights a number of current and developing separation science technologies. The first four themed articles concentrate on ‘chip based technologies’ an area of growing interest to instrument companies, who are striving to adopt some of the now established microfluidic developments into their next generation of instrumentation.

In the first article by Geoff Gerhardt, manager of the Water’s Instrument Research Group, he looks at microfluidic’s as a base technology for the analytical laboratory. In a ‘question and answer’ session he describes the early chip developments and Water’s involvement in instrument design (electro kinetic pumps) and technology applications in the proteomic area. He concludes that their main driver has been to improve both the usability of their LC systems, whilst maintaining the UPLC performance, and he views this technology playing an increasing and important role in the next generation of LC/MS ‘analysers’.

In the second article, from Andy de Mello’s group at Imperial, they look at one of the main problem areas for ‘lab on a chip’ technology, that of sample injection. They describe the challenges of obtaining reproducible injections of what are the extremely small volumes used in high efficiency electrophoretic separations. The paper examines the use of ‘droplet injection’ and comments on its potential use in the fields of genomics, metabolomics, proteomics and disease diagnostics.
In a more application based paper Stephan Buckenmaier describes the joint work carried out by Agilent and Sandoz on a ‘workflow solution’ for rapid and fully automated characterisation of Glycans. The paper describes how the ‘mAb-Glyco Chip’ kit was used with an Agilent Infinity HPLC-Chip/MS system to fully automate the complex and time consuming characterisation of N-Glycans from monoclonal antibodies. So successful was the approach that the analysis and associated data  processing can now be completed within 20mins. The last paper of the series describes the work of Peter Myers group at Liverpool. In what has been a relatively short time Peter has assembled a vibrant group of researchers, looking into a variety of
chip based technologies and concepts.

How are Asymptomatic COVID-19 Infections Differ...

Understanding HILIC separation and improving yo...

The Detection and Quantification of Dicamba and...

Determination of Nitrite, Bromide and Nitrate i...

Tackling the Glyphosate Paradox with IC-MS/MS:...

Measurement of Pesticides in Cannabis sativa an...

Optimising the Chiral Separation of the Pestici...