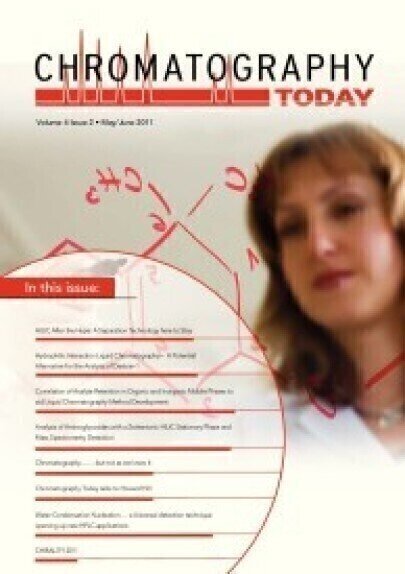 Welcome to the fourteenth edition of Chromatography Today, with the main theme for this edition being Hydrophilic Interaction Liquid Chromatography (HILIC).

In the excellent opening article “HILIC after the Hype” by Tobias Jonsson, Petrus Hemstrom and co authors review the rise of HILIC and look to predict the future of this separation technology. The paper states that it is currently seen as the fastest growing HPLC separation mode, being used by almost 20% of all HPLC instrument owners. With its often unique selectivity it is now being used in all major application areas – Metabolomics, Clinical Analysis, Food, Environment and Biomolecules -offering separations for compounds which have proved difficult to retain on conventional HPLC columns and a simpler alternative to conventional ion-pair chromatography.

Two of the other papers in this edition highlight the potential of HILIC separations, Marc Barber, looks at the separation of Dextran’s using a single HILIC column coupled to a Charged Aerosol Detector (CAD). The benefit of such an approach is  compared with the current European Pharmacopeia (EP) method which can take in excess of 500 minutes. The method developed can now be performed in less than thirteen minutes and is shown capable of providing the necessary molecular mass distributions.

The second paper by Wen Jiang et al looks at the separation of model aminoglycosides with a zwitterionic stationary phase and mass spectrometry detection. Aminoglycosides are commonly used as bactericidal antibiotics and being very hydrophilic and positively charged, are very difficult to separate by reverse phase chromatography unless an ion-pair reagent or pre column derivatisation is used. HILIC is shown to provide good retention and separation of the aminoglycosides and with the coupling to a single quadrupole ESI-MS instrument offers great potential for low level residue analysis in a variety of sample matrices.

Moving away from HILIC but staying with the theme of chromatographic separation Paul Ferguson – the current Chromatographic Society Vice President, along with one of his Pfizer colleagues Ronan Huet describe their work on the correlation of
analyte retention in organic and inorganic phases. As we all know organic mobile phase additives which allow compatibility with massspectrometric detection often give high background UV absorbance – reducing the ability for low level detection. In addition they often offer little buffering capacity and this can lead to variability in HPLC retention times. This paper looks at the correlations between the common organic buffers and their potassium phosphate alternatives to establish if methods developed with MS compatible phases could be transferred directly to appropriate phosphate modified phases, when increased sensitivity for impurity detection is required.

How are Asymptomatic COVID-19 Infections Differ...

Understanding HILIC separation and improving yo...

The Detection and Quantification of Dicamba and...

Determination of Nitrite, Bromide and Nitrate i...

Tackling the Glyphosate Paradox with IC-MS/MS:...

Measurement of Pesticides in Cannabis sativa an...

Optimising the Chiral Separation of the Pestici...